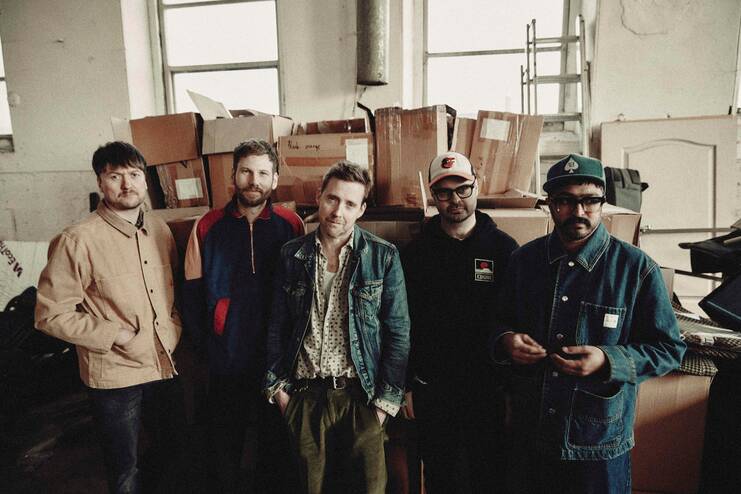 Right off the back of a storm of note-worthy live-performances (including the Invictus Games opening ceremony, headlining Virgin Radio’s: One Big Thank You key worker show, and a televised performance for ITV’s Queen’s Jubilee celebrations), Kaiser Chiefs release their latest single: ‘How 2 Dance, which promises to not only see us through the end of this year, but launch fans into 2023 with impeccable swagger, and heritage songwriting.

“We really wanted to make a song that put together all the things we were trying to get right over the last three records”, notes frontman Ricky Wilson. “The call to arms of ‘Education, Education, Education and War’ (2014), the party atmosphere of ‘Stay Together’ (2016), and the classic Kaiser-yness of ‘Duck’.

Where 2019’s ‘Duck’ straddled the tide between Northern-Soul euphoria and early ‘00s antithesis (in a statement of melancholic perfection), 2022 see’s Kaiser Chiefs stepping into a renewed spotlight; a hook-heightened universe in which Wilson (vocals), Andrew “Whitey” White (guitar), Simon Rix (bass), Keyboardist Peanut and Vijay Mistry on drums, come together to once again create what they craft best; breakthrough belters for the world’s dancefloor.

Born out of a lunch date with Martin Toher and Mark Lewis of B-Unique (two of KC’s longest standing supporters), ‘How 2 Dance’ is a euphoric masterclass in contemporary songwriting. Further leaning into their collaborative spirit, ‘How 2 Dance’ sees the band calling in Rudimental’s Amir Amor, in bid to create something beyond the traditional band structure. With additional album credits from Nile Rodgers and Lewis Thompson (David Guetta, Becky Hill), this is music for the people. An anthem for the everyday that simultaneously cements KC’s unparalleled reign on the indie-disco pedestal of the UK music scene, whilst demonstrating their future-thinking adaptability which keeps the spirit alive.

In a post-pandemic age of technology, freedom, and viral choreography, ‘How 2 Dance’ is a guaranteed success. “It’s about letting go,” muses Wilson. “Not worrying about what other people think you should be doing, and celebrating the fact that you can go pretty far without doing what is expected or repeating yourself.”

With the same platinum standard intuition that fans have repeatedly fallen in love with over the years,  ‘How 2 Dance’ will be, without a shadow of a doubt, an instant Kaiser Chiefs classic. A timeless slice of alt-pop perfection which calls upon all the experiences the band have had thus far, “it may not be the smoothest of journeys” Wilson continues, “but sometimes you need a bit of turbulence to remind you that you are flying.”