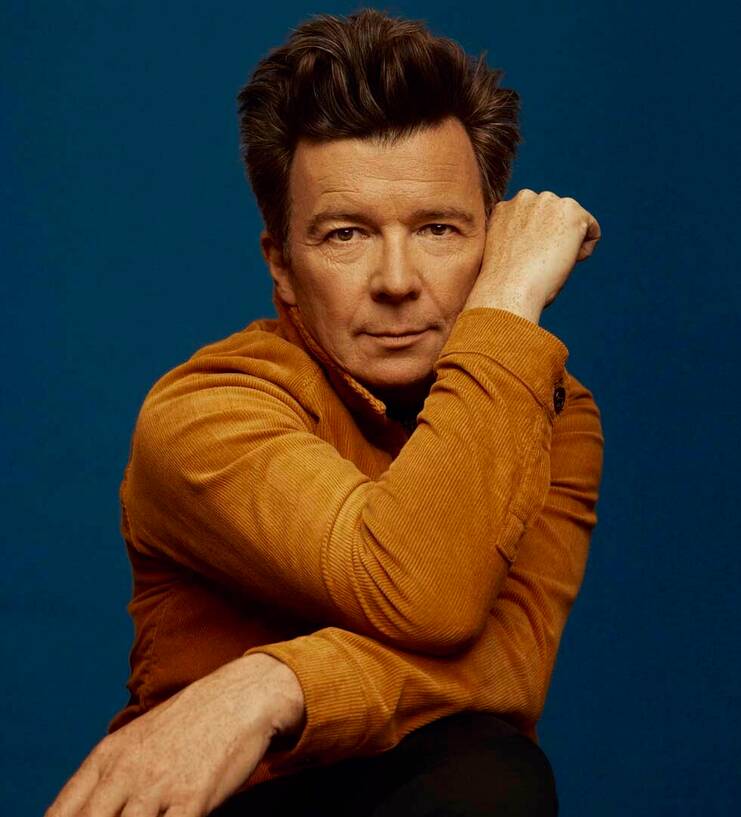 Rick Astley is back!

Rick Astley is still here, still moving forward and always guaranteeing entertainment and joy on record, on stream, on radio and on stage. But now he's pushing to even greater musical heights. Over three decades into his blockbuster musical career, the British singer and songwriter is consistently bringing the house down, performing internationally with everyone from a-ha to Foo Fighters. Winning over fresh fans – touring with Take That in 2019, he played to audiences of more than 500,000. Taking over new platforms: 3 million TikTok followers don’t lie. Having new hits – his entirely self-written and self-produced 2016 album 50 was a UK Number One that sold 400,000 copies. Accidentally “inventing” global cultural phenomena – Rickrolling, anyone? And how’s your “Astley Shuffle”, as immortalised in an already iconic Fortnite emote?

Indeed, arguably Astley is more prominent in popular culture now than he ever was. Witness the outpouring of emotion across social media after the appearance of Never Gonna Give You Up in a 2021 episode of Ted Lasso. Even Astley was initially at a loss for words to describe the impact of his signature song’s use in a heartbreaking funeral scene in Apple TV+’s much loved, multiple-award-winning comedy.

“It’s taken a little while for me to process what I think about the latest episode of Ted Lasso,” he tweeted in a video. “I’m a massive fan of the show, and I was just completely blown away with what they did with that song. I have to say to Hannah Waddingham — Emmy Award-winning Hannah Waddingham — you did an amazing, incredible job. It was so emotional, so moving, so incredible. People have said they even cried [during] the church scene, I don’t want to give too much away, but... just amazing, thank you very much for including that song in your beautiful show...I’m blown away. Just fantastic.”

That accolade came shortly after another landmark moment. In summer 2021, around the 34th anniversary of its release, Never Gonna Give You Up hit one billion views on YouTube. Astley’s debut solo single, a Number One in 25 countries in 1987, joined an elite club of all-time musical classics from the pre-internet age that have reached that landmark – and is in fact one of only 23 songs ever to have reached that milestone.

But Astley has never been one to rest on his laurels. In 2020, for example, his homemade lockdown videos amassed 10.3 million views on YouTube. That year’s festive single Love This Christmas has to date been streamed almost five million times on Spotify. His single Everyone of Us was released in partnership with the BBC and Children in Need, to raise funds and awareness in the first year of the pandemic.

“There were an awful lot of people doing things in the background who were never going to get any credit for it,” he reflects of that first year of lockdowns and medical emergencies. “And obviously, thankfully, the NHS has been recognised a bit. But as far as I’m concerned, people who work in that world need to be paid more and looked after better.”

That straight-talking honesty, drive and commitment are Astley all over. They’re qualities that explain, in part, the enthusiastic engagement of his fanbase – and, in turn, the work ethic and passion he puts back in.

As if that wasn’t enough: Astley recently launched Bub Club. Developed with Jacqui and Kevin Hughes, the YouTube channel for preschoolers shows animations filled with original music, together with new enhanced versions of classic nursery rhymes and songs. Astley is also co-writing and co-producing new songs for Bub Club, including the just-released Wiggle Waggle Dance. Finally, The Astley Shuffle has a rival…

Meanwhile, Astley hasn’t forgotten the adults: he’s partners in the London outposts of Danish brewpub and restaurant business Mikkeller. Skål! (That’s Danish for cheers.) (You knew that.) All that said… Still, for sure, it’s incorrect to say that Ricky Astley never went away. In 1993 he did effectively retire, at the ripe young age of 27. By then he’d had six intense years of musical success and the attendant fame. It takes a big talent to achieve so much in so little time. It takes an even bigger character to walk away from it all at such a tender age. But Astley did exactly that, retreating to the quiet of family life for just as long as he needed it – the best part of a decade, as it turned out.

But you can’t keep down a man with music in his soul. In spring/summer of 2022, Rick’s steamed ahead, with a mammoth, 56-date, three-month arena tour of America in the stellar company of New Kids On The Block, Salt-N-Pepa and En Vogue for the Mixtape Tour 2022. The artist from the small town of Newton-Le-Willows in Lancashire recalls how he began his touring life after the release of second album, 1988’s Hold Me in Your Arms – but only because he insisted. Such had been the out-of-the-box success of Never Gonna Give You Up, he’d spent almost two years constantly doing radio and TV promotion, chasing his chart-topping success all around the world. There was literally no time for proper gigging. And, as a brand-new artist – albeit one with two American Number One singles straight off the bat (Never Gonna Give You Up and Together Forever) – Astley barely had time to draw breath, let alone question anything. Nonetheless, he wasn’t going to take anything for granted.

“Music saved my life, really,” he says. “My mum and dad had a horrible break up when I was very young. It was quite traumatic, if I’m honest. Singing got me out of the house, it got me into a choir, then it got me into a band and finally got me out into the world. It’s put me in so many amazing places, it’s ridiculous, just because as a kid I found I had a voice.”

He’d been raised by his older siblings on an eclectic mix of prog rock, classic rock, indie rock and Northern Soul. Forming bands in his teens, drumming and later singing, he toured the northern club circuit. An unknown kid with a big voice, he was talent spotted at 19 by legendary 1980s hit makers Stock, Aitken and Waterman. Famously, he worked in their South London studio for a year as a tea boy, watching the songwriters, engineers and producers, learning the ropes and honing his craft before, eventually, getting a shot at recording a single of his own. And the rest, as they say, was hysteria, for two years at least.

“But when it got to 1989, I literally said: ‘I’m going out and playing live,’” says Astley. “And everyone around me was like: ‘Oh, really, do you have to?’ I said: ‘YES!’” he remembers, laughing. “That was important to me because that was how I’d started out as a kid, playing pubs and clubs and under-age discos around the north of England. That’s how everybody I knew started.”

It was also a case of proving something. As he paraphrases now his argument back then: “I can sing, you know? I know I’ve got that hair and I shuffle about a bit. But I’m a singer. That’s what I do. The reason somebody signed me was ’cause I’ve got a voice – and I want to use it.” “And it just seemed ridiculous,” he says now, “for me not to. Also, I’d been in America a lot, and whenever I did the big TV shows there, I’d play live with their house band. I’d turn up, they’d have learned my tune, it’d sound amazing. Then you’d go on the cameras in front of America – or, a lot of people, anyway – and sing your songs, feeling like: ‘Yeah, this is what I should be doing.’”

Still, for all his 100 percent commitment to his music and craft, Astley never takes himself too seriously. What we might call the disruptive online insurrection – or, alternatively, “a prank” – that is Rickrolling “is weird,” he acknowledges. “Obviously I’m super-aware of it, because I can’t not be – every friend I’ve got, wherever they are in the world, they go: ‘Have you seen this?’ So it’s just a bit mad.

“And I don’t know how other artists would react to that happening to their biggest song. Because I’m not kidding, it is absolutely ridiculous! Now everybody knows that song, from the age of four or five, up to, well, close to death. It was a popular enough tune in its day, a Number One right round the world, and I think it stood the test of time. But with Rickrolling,” he marvels, “it’s gone to another level.”

And so, in 2022, is Rick Astley. Part of that new level involves a 35th anniversary reissue of his debut album Whenever You Need Somebody, complete with b-sides and new mixes. As he says in the sleeve notes for the new, lovingly assembled package, “as an album, I’m still really proud of it.

“Whenever I sing these songs or even hear them on the radio, it brings back so many great memories. It makes me appreciate how lucky I was to have met all the people I worked with around making that first record. Never Gonna Give You Up established me in America and let me travel the world – which, for a 21-year-old from Newton-Le-Willows, was mind-blowing. I'm still reaping the benefits from that today."

Indeed. A record that “changed my life forever" is one of the reasons for Astley’s stubbornly impressive – and expanding – international profile. And yet, as the success of his recent record releases has proven, his fanbase are as fired up by his new music as they are by his classics.

To bring these much-loved classics to life has also been a big ambition of Rick’s for a very long time. Rick said: "I love singing these old classics and I cannot wait to see you there!" Will there be more shows? Or a swing influence on the songs Astley will be writing for his next album? More inspired left-field collaborations?

With Rick Astley anything, still, is possible.